I have been fortunate to have a TEC 140 APO refractor for imaging. It has a wonderful focuser, and when used with the Astro-Physics 0.75x photographic reducer, gives a reasonable fast focal ratio of f/5.4 (750mm). I've taken a large number of images with this configuration with great success.

Recently I have been tinkering with a GSO 200mm f/4 Newtonian. It has a focal length of 800mm, so it is comparable to the TEC 140 APO when used with the reducer.

I decided one night to take some images with both scopes using my SXV-H9 ccd camera. The point of this test was not to start a refractor vs. reflector war, but to see if one could see any difference between imaging with either of these telescopes. One significant factor on image quality are my local observing conditions. My experience imaging binary stars with a high speed webcam tells me a typical night averages a Pickering scale value of 4 to 5 at best. My guess was that these poor conditions would reduce the most precise optical instruments to more pedestrian performance.

Another factor affecting the image quality when images is the pixel scale of the telescope-CCD system. With my SXV-H9 and a telescope at 800mm, I am imaging at a pixel scale of 1.65 arc-seconds/pixel. We are undersampling the theoretical resolution of any telescope larger than 3.5 inches. Ideally when we focus we are putting most of the light in a central pixel, with the surrounding pixels recording significantly less light.

Combined would these effects mean an under $500 Newtonian would serve as well as a significantly more expensive APO?

My test setup was a tandem arrangement on my Atlas EQ-G. The guidescope remained attached to the tandem bar, and I would exchange the test OTA on the other side. Fortunately the two scopes are very similar in weight so I was able to determine a configuration that only required me to move the main counterweight when I switched scopes.

The TEC 140 APO is outfitted with a Astro-Physics 0.75x reducer. I set the spacing as suggested in Russell Croman's writeup.

To correct the intrinsic coma from the Newtonian design of the GSO 200mm f/4 I used a Baader MPCC. I set the spacing between the MPCC and the chip to be 55mm as suggested by the manufacturer.

Here is a photo of both scopes: 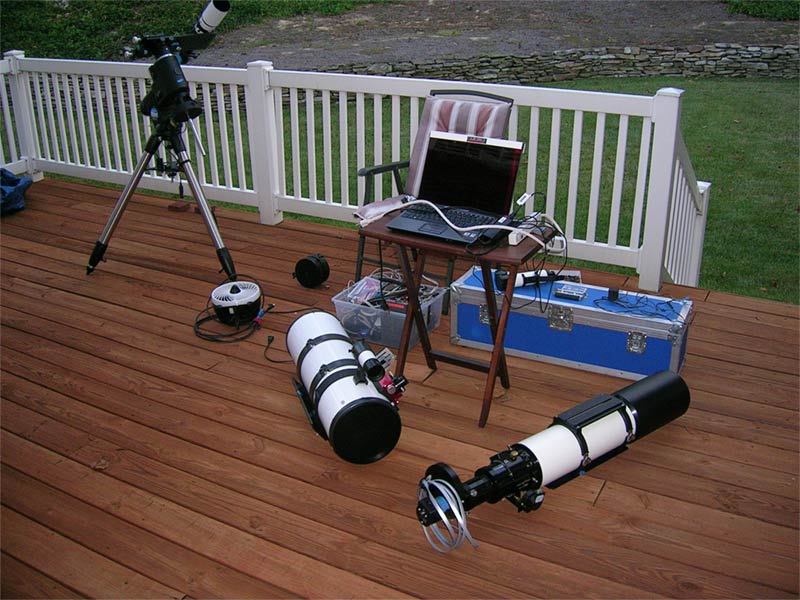 Focus is always an important element of imaging. I spent a great deal of time focusing each image so I hope I have eliminated that influence on the results. I fine tune the focus by hand using a Robofocus unit and I watch the real time output from Maxim for about a minute to judge the final focus. If I misfocused I believe I would have misfocused each in a similar way. But it is a consideration when examining the images.

I choose 3 targets for testing.

The FITS files for all of these images is available at:

I recommend you download and examine these with your favorite image processing software. I have tried to stretch the images similarly below but I only did a quick adjustment by eye and so there may be some features that are misrepresented. For example, star size is sensitive to how aggressively you stretch the data. The FITS files have not had their histograms stretched in any way.

The Moon test was a quick way to confirm the focal length of the two telescopes were approximately the same. I do not think comparing the tiniest details between the image from each scope makes sense because the image quality is tied to instantaneous seeing conditions. I took 10 images with both scopes and picked out the best from each scope.

Here is a 50% scaled version of both images (mouseover text to see image, javascript required):

At this image scale its difficult to see any real differences between the two images, aside from the fact the GSO image is slightly larger. To get a better view of the comparison, here is a zoomed in version of the above image set:

It should be clear there is no significant image difference in this test. The seeing conditions were such that the two scopes perform similarly. Let me stress that these are raw images which I only stretched in Photoshop CS3 - no sharpening or wavelet filters were applied.

I think its reasonable to expect the images to be similar because of the fact we are undersampling. The pixel-scale with my SXV-H9 camera is approximately 1.7 arc-seconds/pixel. The theoretical resolution of both of these two scopes is less than 1 arc-second. Therefore we should not expect to see a difference if both scopes are collimated and near theoretical performance.

I always enjoy trying a new imaging configuration on a good globular cluster. Fortunately M13 was nearly overhead so I was able to image with both scopes. Here is a 200% zoomed version of both images:

Again there is very little difference except the GSO image is at a lower pixel scale. There is some slight trailing in the TEC image which I believe was due to some guiding issues and are not due to the optics. Also I did not get the camera angle matched so there is a slight rotational difference between the frames.

My final test was to try imaging M16 in H-alpha.

Let me stress the only processing I've done for these images are histogram transformations. I have not use any deconvolution or sharpening filters. Stellar Profile Statistics Using sextractor I collected statistics on the stars in each image above. I will plot a histogram of FWHM for the stars in each image. The x axis is the width of the stellar profile (in PIXELS) and the y axis is the number of stars with a profile width in that bin.

I have attempted to present a quick imaging test to see what differences, if any, there would be between using my GSO 200mm f/4 Newtonian and my TEC 140 APO. From the images it should be clear any differences are minimal in this particular test. The GSO is operating at a slightly long focal length (800mm) versus the TEC with focal reducer (750mm). It is also at a faster focal ratio (f/4 versus f/5.4), which should reduce the imaging time required for extended objects.

The advantages of the TEC are that collimation is not required and its less sensitive to thermal cooldown issues. The GSO has not been difficult to collimate, but being an f/4 Newtonian is does require a great deal of care. I use a laser collimator followed by an autocollimator to confirm collimation. Another potential advantage (depends on personal taste) is that the TEC has no diffraction spikes. And the TEC pretty much was ready to go out of the box. It has an awesome focuser and you can use the great variety of Astro-Physics accessories after installing an adapter. I would also hazard to guess the unit to unit quality variation is much lower with the TEC than the GSO.

The advantages of the GSO are primarily cost and aperture. And (again personal preference) it has diffraction spikes on brighter stars. A disadvantage is that it is not ready for imaging out of the box. I had to make some improvements to be able to image with the GSO, as covered in my previous writeup. However, since it is a Newtonian I felt great ease when I was upgrading the scope due to its simple design. I couldn't ever imaging tinkering with an expensive refractor like the TEC!

I would encourage anyone interested in imaging to consider a Newtonian as an alternative to the traditional choices of a SCT or refractor. With a good coma corrector like the Baader MPCC you can achieve coma-free images. You just need to make sure you have a large enough secondary to minimize vignetting, and enough backfocus to achieve focus with your camera.